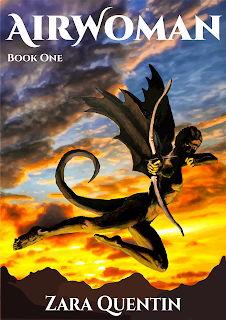 Zara now resides in Melbourne, Australia with her husband and three children. She is currently working on the next installment in the Airwoman series.

Airwoman is a unique book, it does not feel like every other book out there that I have read.  Which is nice, as when you have read a lot of books sometimes you start feeling a lot of I have read this before.

I enjoyed exploring the Dragonverse and getting to know the characters, I felt that the characters where strongly built and the world is interesting.  A nice read.

Giveaway Details:
2 winners will receive a $25 Gift Card to the book retailer of their choice from Amazon, B&N, or TBD, International.