A dishonored swordsman running from his past.

A city shrouded in dark magic.

Daniel Harper was champion, until a single mistake destroyed his fencing career forever. With nothing left to lose, he flees to Eastern Europe, where he can start over... where he can be someone else.

In the exotic, lantern-lit crevices of a nameless city, Daniel meets two people who open very different kinds of doors than the ones he is searching for: the troubled flower girl Kashka, who holds the key to a nightmarish otherworld; and the enigmatic street magician and self-professed love tourist Ink, who has the power to bend others to his will.

As Daniel plummets into a downward spiral of hedonism and dereliction, he is tormented by macabre visions of a frozen world in endless darkness where an evil tyrant has stolen the sun, where humanity's remnants fight to scrape out a cruel existence underground, and wandering spirits inhabit the bodies of the recently deceased. Daniel is doomed to return to this Night Country every time he falls into a deep sleep. But the longer he spends there, the more Daniel realizes his curse is anything but an accident....

Adam Vine was born in Northern California. By day, he is a game writer and designer. He has lived in four countries and visited thirty. He is the author of two novels and many short stories. When he is not writing, he is traveling, reading something icky, or teaching himself to play his mandolin. He currently lives in Germany.

Kevin Meyer is a devoted Midwesterner, raised in rural Wisconsin and transplanted to Tulsa, Oklahoma over three decades ago. A career-long voice-over and music radio guy, his iPhone playlist ranges from Alice Cooper and Waylon Jennings to Twenty One Pilots and The Zac Brown Band. Favorite reads are dominated by political biographies (Lincoln, Truman, Kennedy)... and Stephen King. 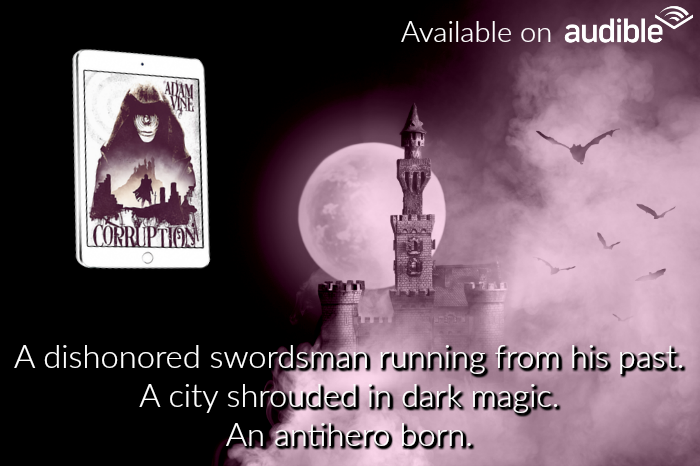 I received this audiobook as part of my participation in a blog tour with Audiobookworm Promotions. The tour is being sponsored by Adam Vine. The gifting of this audiobook did not affect my opinion of it.

I had a hard time getting into this story at first, the purposeful leaving out of place they were in when they were in the real world and using City or Country kept throwing me off.  It felt jarring to me, and if it had been something I just picked up to listen to I may have stopped.  Which would have been sad because it is a fantastic book and once I got past that I got into it very fast and missed a few bedtimes.

When Daniel and Kashka took the tour of the concentration camp I found the descriptions to be particularly vivid and disturbing.  It was excellently written, as was the rest of the book, but that particular scene will stay with me for a long time.

I look forward to the second installment of Corruption.

This is the first book that I have listened to that has been more of a narrative than a performance that has not put me literally to sleep. (I have a copy of Sherlock Holmes that can put me to sleep in under 10 minutes)  At first listening to Kevin Meyer's voice and the lack of any changes from character to character I was quite worried about that but by the third chapter though I had gotten used to his style and grown quite fond of it. There are parts of this book that would have given me nightmares if read in a different style.

Q & A with Author Adam Vine

Notes from 'Round the Bend

It's Novel to Me

Shh I Am Reading