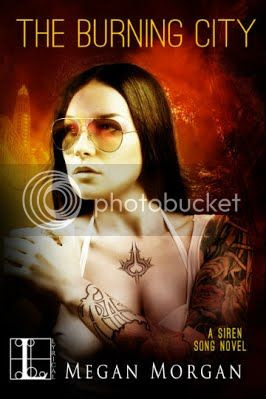 Book #3 of the Siren Song series:

When the smoke clears, who will be left standing?

Tattoo artist June Coffin has another, more hidden talent: she’s a Siren who can influence people with the sound of her voice. But in the wake of a murder and shake-up at the Institute of Supernatural Research, her own powers are starting to kill her. The only chance she has of saving herself—as well as her kidnapped brother and best friend—is to become a vampire. But joining the ranks of the vengeful vamp, Occam Reed, is the last thing June wants to do.

Occam isn’t the only danger June needs to worry about. Power hungry telepath Robbie Beecher will stop at nothing to gain control over Chicago. He’ll destroy anyone who gets in his way—and June’s lover, Sam, is high on the hit list since his bid for Mayor. With the city and June’s heart being pulled in different directions, it’s only a matter of time before the powder keg explodes…and time isn’t something June has much of left. With a city on fire, can she rise from its ashes?

Like a bored, despondent child, she dragged around the house, on the verge of throwing a tantrum because there was nothing to do. She walked out on the front porch. Night had fallen, the stars out. She trudged down the long set of stairs from the porch to the driveway. Dipity plunked down the steps after her.

“Don’t run away,” June told the cat as they reached the bottom. “I’m not digging through the bushes to find you. You’ll be sleeping outside tonight.”

June sat down on the bottom step. Dipity walked around the yard, sniffing things. Lightning bugs flickered in the darkness, little yellow pulses of light. The driveway was packed with cars.

She picked at her fingernails, trying to shake the looming sense of awkwardness hanging over her, the loneliness of being an outsider, of being that left-out kid she once was. She’d vowed she would never be that girl again, yet here she was.

A nearby sound startled her. She jerked her head up.

What she’d heard was strange and alarming—the sound of leaves rustling and a weird, heavy thump.
Dipity shot back over to the stairs and stopped next to June, tail in the air, staring across the yard.

June got to her feet. She squinted into the shadows under the line of trees across the yard. The trees weren’t too far away, maybe fifty feet, but it was so dark now she couldn’t make out anything.

“Hello?” she called. Maybe one of the guards was patrolling the grounds.

She was tired of being spooked, of hearing bizarre sounds and not knowing their source. She crossed the yard toward the trees, the grass prickling her bare feet. Dipity sprinted back up the stairs to the porch.

“Hello?” she called again. “Is someone there?”

As she drew closer to the trees, the shadows lessened in density, and she could make out something—a shape—lying on the ground. She slowed, holding her breath. She didn’t want to be attacked by a nervous possum or sprayed by a skunk.

However, the shape was much too big to be an animal. In fact, it looked like a person.

She stopped, about ten feet away, standing beneath the overhanging branches. She tried to convince herself she wasn’t seeing clearly.

“Hello?” She considered using her power. “Hey, can you hear me?”

The shape didn’t move. It couldn’t be a person. What the hell would a person be doing lying underneath the trees in Sam’s yard?

Unless he wasn’t alive.

Then came the unmistakable soft swish of someone walking through the grass behind her. Before she could turn around, someone whispered close to her ear.

“For you, darling. Come home soon.”

She spun around, a scream catching in her throat.

No one was there. 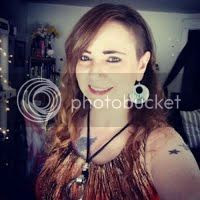 Megan Morgan is an award winning urban fantasy, paranormal romance, and erotica author from Cleveland, Ohio. RWA member, bartender by day, and purveyor of things that go bump in the night, she’s trying to turn writing into her day job so she can be on the other side of the bar for a change. Hailing from the often-wintry shores of Lake Erie, she lives with an attention-seeking cat and her adult son, both of which shed too much.