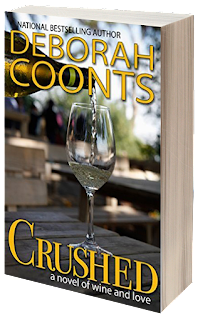 Title: Crushed, a novel of wine and love
Author: Deborah Coonts
Publication Date: March 9, 2016
Genre: Contemporary Romance
Synopsis
In Napa Valley, he who has the best grapes wins.
And in the pursuit of perfection, dreams and hearts can be crushed.
Sophia Stone is a widow on the brink of an empty nest, stuck in an unsatisfying job managing the vineyard for a mediocre Napa vintner.  Faced with an uncertain future she wonders how do you choose between making a living and making a life?  Between protecting your heart and sharing it?  Five years ago, after her husband was killed in an accident, Sophia put her heart and dreams on ice to care for those around her.  Now her home, her dreams, and her family’s legacy grapes are threatened by the greed of the new money moving into the Valley.   Sophia has a choice—give up and let them take what is hers, or risk everything fighting a battle everyone says she can’t win.
Nico Treviani has one goal in life: make brilliant wine.  A woman would be an unwanted distraction.  So, while recognized as one of Napa’s premier vintners, Nico finds himself alone… until his brother’s death drops not one, but two women into his life—his thirteen-year-old twin nieces.  In an instant, Nico gains a family and loses his best friend and partner in the winemaking business.  Struggling to care for his nieces, Nico accepts a job as head winemaker for Avery Specter, one of the new-money crowd.  And he learns the hard way that new money doesn’t stick to the old rules.

Amazon | Barnes & Noble | iBooks | Kobo | GoodReads
Name: Sophia Otero Stone
What person do you admire most:  My grandfather because he devoted his life to his passion, breeding grape varietals.  But, I learned something about him recently that has me questioning some of the things I thought I knew.
Where do you live: Outside St. Helena on Howell Mountain in Napa Valley, California.
What do you care most about in the world: My children.
What is the most embarrassing thing that ever happened to you: I let myself down; I lost my dreams.
What Talent would you most like to have: The ability to speak honestly and coherently when confronted

Deborah Coonts’ mother tells her she was born in Texas a very long time ago.  Deborah isn’t so sure—her mother can’t be trusted.  These things we are fairly certain of though:  Deborah was raised in Texas on BBQ, Mexican food and beer.  She is the author of WANNA GET LUCKY? a humorous romantic mystery set amid the glitz, glamor and gaudy of Las Vegas that was a NY Times Notable Crime Novel and double RITA™ Finalist and received several starred reviews as have the five sequels. CRUSHED the first novel in her Heart of Napa series is out now.  Deborah can usually be found at the bar, but also at her website.
Social Media Links

There is a giveaway for this tour. One (1) $50 Amazon giftcard and one (1) digital copy of the Lucky series by Deborah Coonts. Ends 5/27. Open Internationally. Void where prohibited.