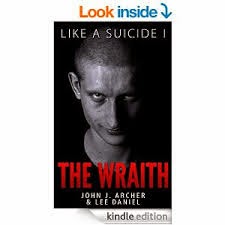 I received this book free in a Library Thing Member Giveaway in exchange for an honest review.

The description of the book on Amazon is:

‘Wraith' is a serial killer. Not that he would call himself that. The best killer in the world. That he would agree with. He believes proper order can only be brought about in the world via chaos. Most of his kills make sense in that way. It just so happens that now someone has the nerve to bring chaos into his world by stealing money from him.
After tracking down the perpetrator, James and confronting him, Wraith concludes that he is either a genius or a stupid thief who just happened to mess with the wrong man. Either way, Wraith promises himself to enjoy this kill.
Wraith concludes James must die but decides to take his time and find out if this is the guy that might provide the challenging kill he has been looking for all along. He has to do all this with Detective Sweeney, the local superstar detective hot on his trail. As he gets ready to go for the kill Wraith can sense that something is wrong. It's just that this time, the kill feels ‘Like A Suicide’.
This book is extremely graphic in more than a few spots, it made my stomach a little queasy in at least one place.  So it's definitely not for someone with a weak constitution, and I wouldn't suggest reading it while you are eating.

That being said it really did keep me guessing almost until the end, which was fabulous.  I was a little underwhelmed by the actual ending but everything leading up to it was great if a little gory.
2014 Book Reviews books library things like a suicide reading