April 21, 2014
This was more of a well it's there so I will reread it sort of thing than a conscious choice to read it again after so many years.  What happened was I decided to borrow Ace's e-reader for the trip to Cuba since it has a longer battery life than my new one and is touch unlike my old one.  So I just plugged it in to the computer and synced it to my Kobo account, which immediately dumped 1800 and some odd books onto it. (not the best idea ever)

Apparently there is a bit of a learning curve to the thing because I couldn't figure out how to get off the first page of books at first, hence deciding to read 1984. 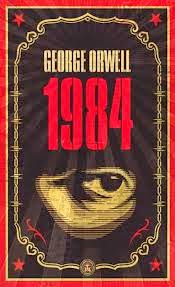 It came across both better and worse than I remember it being when I read it in high school.  I found Winston easy to identify with, on the surface going through the motions while underneath you are questioning what's going on around you.  Julia also felt very real to me but for very different reasons, she seemed very callous to me, reminding me of a lot of people I interact with who operate on the "me first" principal.

The whole idea of being constantly watched to the point where even your thoughts aren't safe...that's a bit terrifying but less now than I found it in high school.  At some point I guess you learn that there are things scarier than being constantly monitored.  The rewriting of history so it says what they want it to say...much scarier.  The control of the media we ingest so we are pretty much only exposed to what they want us to see...