A is for Antarctica

April 01, 2014
I have always had a fascination with Antarctica, and not just because it is fun to say.  There's something about this large mass of virtually uninhibited land that just begs to be written about it. 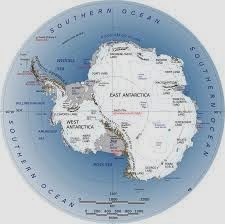 So here are the neat things I learned about Antarctica:

1) It is considered a desert with an annual precipitation of only 8 inches along the coast and less inland.

2)  The temperature has reached a bone chilling -89 degrees Celsius (-129 Fahrenheit).

3) There are no permanent human inhabitants but 1,000 to 5,000 people are stationed there doing research depending on the time of year.

4) There is a treaty signed but 49 countries that prohibits military activities, mineral mining, nuclear explosions and nuclear waste disposal.  This same treaty supports scientific research and protects the continents' ecosystem.

6) If the West Antarctic Ice Sheet were to breakdown the world's oceans would rise several meters in mere centuries.