June 22, 2013
On the Friday nights before I work on the Saturday it has become a sort of running tradition for my friend to come over and we would watch a movie or play a game.  Last night my best friend and her boyfriend (who is also a very close friend) joined us and we played Cards Against Humanity.

Now, I have been dying to play Cards Against Humanity since I bought it before Christmas last year, but it has just been sitting on my bookshelf collecting dust because I never had enough people to play.  Imagine my excitement last night when we sat down to play.  (It was pretty through the roof)

I don't have many as we were playing pictures of this, I was going to do live action tweeting of me losing and the smack talk that goes with that.  Like I usually do on game night, but CAH was actually too much fun to spend time doing that.

There were some hilarious combinations I wish I had gotten shots of for the post but I sadly only came away with one picture.  I was particularly proud of my answer to this one, which was not the winning answer.  Please note that the following picture may be offensive to some people. 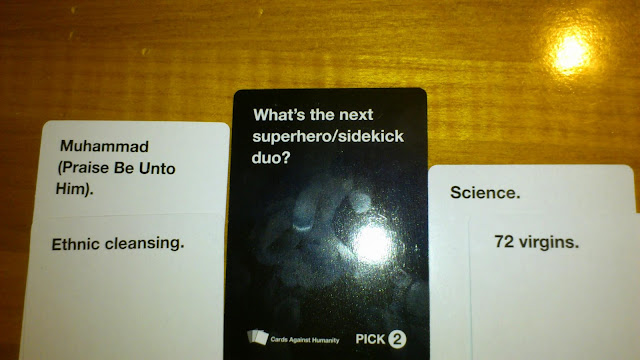 So the question here is 'What is the next superhero/sidekick duo?  My answer was Science and the 72 virgins which I was very proud of because I had shitty cards.  The other one was the winner.  No, my friends are not all horrible people...maybe.
For our next game night we have it lined to play Zombies which I have never played (never heard of until last night) but I am now excited for.  This time there will be pictures.
Cards Against Humanity friends fun Game Night games stuff