My Favorite Things From 2012: Movie

December 27, 2012
My favorite movie from 2012 was another hard choice for me, anyone who knows me if they were asked would probably say that my favorite movie of the year was The Avengers. And having watched it a good 15 times at this point one would think I agreed.

However, when I really sat down and thought about the movie that stuck with me the most this year was The Amazing Spiderman. I know, I thought it was weird too. 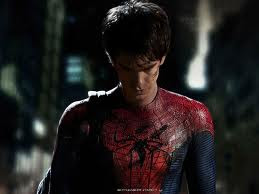 ﻿It's not even because Andrew Garfield was on Doctor Who because I didn't clue in on that until much later.  (seriously though, and with Tennant too)  It's because it is the one movie of the year that I and both of my kids enjoyed together.  Also it is the longest movie Cat can sit all the way through.  (she is a HUGE Spiderman fan, I don't know why)
I think it is awesome that I have passed along my love for superheros to my children.  (I am not the biggest Spiderman fan)  I also thought this movie was WAY better than the last box office go round with our friendly neighbourhood Spiderman.  (no offence)
Also, Dennis Leary is awesome.

2012 bonding with my kids favorites superheros