P is for Panic At the Disco!

April 18, 2012
Yup, that's right.  How random is that?  Probably not very as I think M was probably about a band as well but I wrote this one first because it amused me.  I like to be amused.  <giggles>  Panic at the Disco is a Band that highly amuses me.  Just the name alone is a source of hours of amusement.  (small minds) 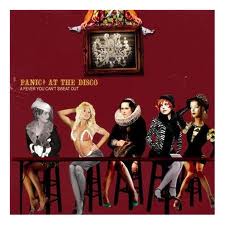 I will admit, if I hadn't seen them live first I probably wouldn't like their music all that much it's more of an acquired taste than an OMG I loved them right away kind of thing.  (awesome live though)   I am a big fan of their lyrics though.  There is a line in this song that really resonates with me:


The lyrics are "Just for the record, the weather today is slightly sarcastic with a good chance of: A. Indifference or B. Disinterest in what the critics say."  It's how I feel most days if you know what I mean.

The other song that I really love from them is The Ballad of Mona Lisa.  I don't know why, I just find it really catchy.


Are you a Panic at the Disco Fan?

A-Z Challenge Panic at the Disco