G is for Gay Rights

April 07, 2012
Now I am not usually one to open my mouth about politically based subjects on a public platform because I know that thing can get heated and nasty really fast for no reason.  Everyone is entitled to their own opinion and as a general rule I find I would prefer not to pollute my ears with some peoples opinions on this one. 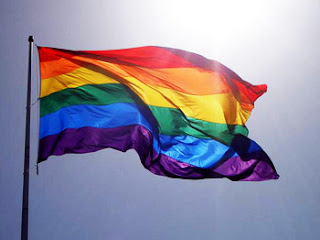 It might be how I was raised (Yay Mom!) or where I live but I don't see this as being this issue that so many people make it out to be.  And I personally think there are far more difficult things to try to explain to my kids than sometimes a man loves a man (or a woman a woman).  Like I don't know maybe war?  Child abuse?  The man that shot himself in the park that they play in?  Pretty much anything they can see on the news.

As for this whole sanctity of marriage thing I'm on the side of the people asking how can they possibly violate it any worse than rest of us already have?  My life didn't exactly end in happily ever after but I am a firm believer that any two people who are insane enough to think that they want to spend the rest of their lives together should have that choice.