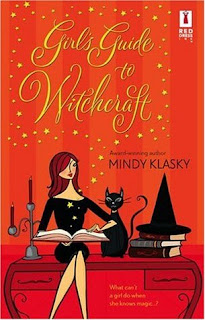 Which is more unlikely?
Meeting a single, straight, reasonably attractive, willing-to-commit man?
Or discovering a secret cache of magic books?

For good-girl Jane Madison, neither has a shot in hell of coming true -- until the day she finds a hidden room . . .
Now she's done a bit of experimenting and found a spell that makes her irresistible to men -- even those who have previously ignored her. And another that turns a cat into her witch's familiar (a snarky, critical, self-absorbed man -- pretty much a typical male). Though her impulsive acts of magic have brought a warder (sexy, grouchy, elusive and determined to stop her from using magic) down on her, Jane's not willing to let go of this fantastic new life.
Though she wonders about having things that aren't "real," she's having too much fun to stop. After all, no one ever said being a witch was easy . . .
I only read the first book in the series due to time constraints but the others are on my TBR list.   It was funny and interesting the whole way through with characters that make you want to get to know them better.  I look forward to reading the rest of the books.
2017 A-Z Challenge April books G Girl's Guide to Witchcraft Mindy Klasky reading reviews