That Thing Formerly Known As My Life Review 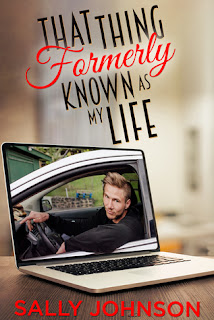 A cross-country move wasn’t exactly what McKinley had in mind for her senior trip, but leave it to her parents to up and move to Rhode Island. Her senior year was supposed to be awesome, but when she ticks off popular cheerleader Taylor, it goes from bad to worse.The only good thing about moving is the mysterious, Camaro-driving, all-around-likeable Nick Phelan. But that mysterious thing that makes him so likeable is also making McKinley suspicious.Nick hides secrets. McKinley harbors doubts. Taylor bares her teeth. But dealing with moving and Taylor is nothing compared to the biggest secret of all.

I thought this book was very interesting even if the plot was a bit predictable.  It did make me super hungry though, and I thought that McKinley was a touch whiny for someone her age but that did make for room for character development.   So all in all a good read.
2016 books reading review Sally Johnson September That Thing Formerly Known As My Life