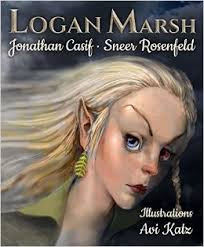 A magnificent group of heroes is lead by a young girl-elf in attempt rescue a magical kingdom from evil forces. Logan Marsh, a young female elf, reunites a group of past heroes to battle the dreadful Hubris, the forceful evil elf who threatens to take over the kingdom with his army of dark-elves, soldjas, goblins and undeads. The heroes face mighty challenges on their quest after a powerful charmed horn, hidden in a deserted castle in a sunken city. Will they reach the horn before the dark forces lay their hands on it and use if for their evil plan?

Mage Choop Krunch, a good-hearted Lutin and a talented sorcerer, joins the famous paladin Achtisanor, the former head of the kingdom's royal guard. With them is Francois De-Fontain Fantastick, also known as “De-Stik”, a cheerful and charming bard, a harper and a poet. Each with his special talents and weak spots, they are all ready for danger and hungry for adventure.
Dunlop, a passionate reporter, half human half elf, follows them, eager to report any exciting events. With him joins Serdamus, a tiny Gnome who documents these fantastic events in his graceful sketch illustrations. The events are captured in the beautiful rhymes of “De-Stik”, that smoothens the plot with his special humor and fantastic point of view.

˃˃˃ Join these fascinating creatures in an unforgettable journey. A fantasy thriller that will leave you breathless.

There were parts of this book that really dragged for me, if I was reading it just for myself I would have skipped over them.  I really enjoyed the stone eagles, I found them to be particularly witty.  In some parts I had trouble keeping the characters straight due to the changing names thing, I had that problem with Tolstoy too so that might just be me.