The Cephalopod Coffeehouse: Meeting One

May 31, 2013
Last month during the A - Z Challenge I wondered my way into joining a blogger's book club over at The Armchair Squid.  I have never belonged to a book club before, mostly because between the kids and work and classes and stuff I don't have armloads of time to show up for meetings and talk to people.  Which is why this is awesome because as anyone who has ever been in my house can attest to, I love books!

For the first month we got to just pick a book and that was super exciting as I have a whole shelf of unread books in my hallway of books.  This was my chance, but the question was which one did I want to read most?  In the end I choose "Good Omens' which is a collaboration between Terry Pratchett and Neil Gaiman.  (now if that doesn't make you want to read a book what would?) 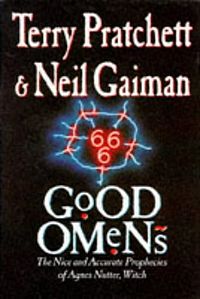 Now, I am a big (HUGE) fan of both of the above mention authors so the fact that I have owned this book for I don't know how long and haven't read it is actually a shock to me.  A big shock.  That's like buying shoes and not wearing them.

Anyway, Good Omens was awesome right from the start, it is far from your normal end of the world story.   (if there really is such a thing as a normal end of the world story)  It has fantastic characterization, I think Crowley might be one of my favorite characters in a book ever.  (after Death of course, I LOVE Terry Pratchett's Death)  You have the Four Horsemen of the Apocalypse (who are wonderfully devious), an eleven year old Antichrist, a hell hound who isn't, and the forces of heaven and hell.

I really enjoyed it and I highly recommend it to anyone who hasn't read it, if such people exist.