Movie Night With The Monkeys

February 25, 2013
On Friday, as is our custom whenever they stay with me instead of going to Dad's, we had movie night.  Now this has evolved greatly since we got Netflix in the house.  It used to be Cat and Ace would each pick a movie and then we would take turns with which one would get to watch their movie first.  If the movie ran long then we would watch the other ones choice the following evening.  A fair system if you ask me.

Now they have so many choices they decided to change they system.  Sometimes it works, sometimes (as in the case of this Friday) not so much.  The new system is some sort of crazy child democracy.  They scroll through their choices each saying what they want until they find something they both agree on.  (5 hours of classic Doctor Who anyone?)

It works great until one finds something they really want to watch (Cat and Aliens in The Attic on Friday) and the other one does not want to watch it.  So world war three breaks out, and mom has to step in to cast the deciding vote., of course picking something neither of them wanted to watch to be fair.

Guess what, we are watching Ghostbusters 2. 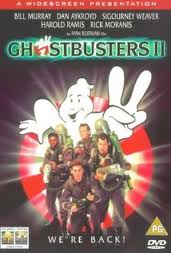 At this point Cat has thrown herself on the floor and is throwing in her bid for an Oscar for most hard done by child because she did not get her own way.  (she is however still looking at the TV just in case this does not turn out to be a total crap fest as mommy was right about Spiderman)

Ace starts going on about how he watched the first Ghostbusters and this will be fun.

Cue the pink slime and runway baby carriage, Cat is now up on the sofa quiet as a church mouse.  Never underestimate the power of anything pink on a pink obsessed toddler preschooler.  Especially evil pink slime on one also obsessed with anything sci-fi.

But wait it gets better...the best part of the movie, I had forgotten this because I hadn't seen it in so long.  The Statue of Liberty to the rescue, walking across Manhattan.

Ace asked is this where Doctor Who got the idea from?  Once I stopped shaking from laughter I answered probably not because if Moffat had of watched this if might have occurred to him that there was no logical way the Statue of Liberty could make it across Manhattan unseen.

It was a fair question though and I have to give him credit, there are a lot of times when I watch old stuff and I think things like that.  But mostly I just wonder why things now aren't better.  Like they used to be.